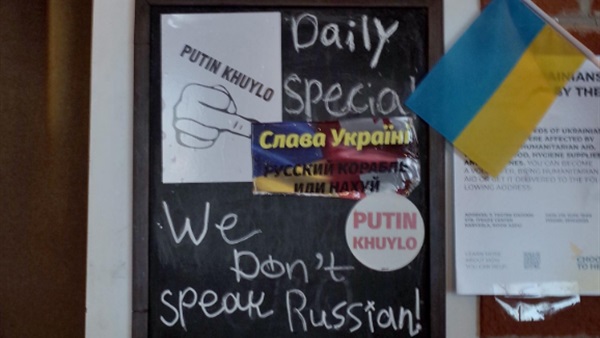 In the heart of the old quarter of Tbilisi, bars and courtyards are filled with people making the most of the waning summer heat. The winding streets of the Dzveli district are the favourite haunt of fashionable young locals, yet today it is more common to hear Russian being spoken here than Georgian.

“The demographics of our small country have completely changed,” said Nodar Rukhadze, 25, a writer and activist born in the Georgian capital. “If you walk in any street in Tbilisi, you will notice how many Russians are here. It’s a national security risk.”

Since President Putin invaded Ukraine in February, an estimated 40,000 Russians have fled to the neighbouring Caucasus nation of three million. With the latest announcement that 300,000 men will be mobilised in an attempt to save the ailing military campaign, more are expected. Already land borders are choked with traffic and flights from Russia are sold out.

Anatoly and Sergey arrived at Tbilisi International airport after travelling for a whole day from Moscow. Like many other Russian men, they left immediately after Putin’s announcement to avoid being called up to fight.

Anatoly described Russia as a fascist state “just like Germany in the 1930s”.

Sergey agreed. “I am not ready to die for Putin’s glory,” he said — but he was anxious about the welcome the pair would receive in Tbilisi. “I hope that the Georgian population will be understanding. We are refugees.”

He may be disappointed. Across Tbilisi, blue-and-yellow Ukrainian flags flutter from balconies, and the streets have been filled repeatedly in recent months with Georgians protesting in support of Ukraine.

“We do not speak Russian here,” reads a sign behind the counter of a trendy bar. The waitress, Salome, 22, has little time for the Russians visiting her establishment. “They do not respect us,” she said. “They insist on speaking Russian. It’s because they still see us as a colony.”

Another bar, Bassiani, has banned Russians entirely. Salome approved. “We deserve a place for ourselves.”

On the streets the message to the new arrivals is even clearer, spelt out in graffiti. “No Russian is welcome here, good or bad,” reads the message on one wall. “Go home Z!” reads another.

A handwritten sign dangling from a balcony goes further: “Putin is killing people in Ukraine while Russians eat khachapuri in Georgia.” Khachapuri is a local cheese bread.

The new arrivals are treated with greater suspicion than those who came in March: locals ask why they were happy to live in Russia for the past seven months, with knowledge of the atrocities committed by Putin’s army.

The war in Ukraine is seen by many Georgians as their war: they know well how it feels to be occupied by Russia, with whom they share a 559-mile land border. In 2008 the Russians invaded, and their troops remained in the northern border regions of Abkhazia and South Ossetia after a short war. Georgia considers them now as occupied territories. In effect, the Russians now fleeing to Georgia are seeking refuge in a country which has given up a fifth of its territory to the Russian military. Georgia, like Ukraine, has spent most of the past 200 years as a Russian colony, both under the Russian empire and the Soviet Union.

Like many young people in Tbilisi, Salome speaks Georgian and English. It is different for her parents and grandparents who grew up in Soviet Georgia, where they were subject to the pre- eminence of the Russian language.

Rukhadze said: “My generation will never answer in Russian. Even if we spoke it, we would refuse to respond, as a political act. I was 11 when the war started. I remember the bombs.”

Salome hoped that the Russians who arrived would try to see things from a Georgian perspective, but she was sceptical: “They come to Georgia. They drink our wine, enjoy our hospitality. But they don’t try to understand us.”

Tensions have risen over the summer. In August a Georgian taxi driver was charged with kidnapping after he abandoned two Russian-speaking tourists 40 miles outside Tbilisi after they had demanded he speak Russian and turn off his Ukrainian music. He was acquitted by the court. Rumours were rife that Russian spies and saboteurs had come across the border. At a popular bar, a Russian waiter admitted to being an FSB informant.

In an attempt to stem the human tide, Georgian activists began pushing for mandatory visas for Russians, who can enter visa-free for a year. An April poll indicated that two thirds of the population supported the idea. The calls to the government have largely fallen on deaf ears, however, with the economic benefits of having large numbers of relatively wealthy Russians moving in a factor.

Already the arrivals have sent rental prices in Tbilisi soaring: a one-bed flat in the centre of the capital costs £600 a month, triple what it was before the influx, and far beyond the means of most Georgians.

Georgia’s position may be hardening at last. Irakli Garibashvili, the prime minister, has referred to Russia as an “occupier” of Georgia and has spoken of the “unjustified” invasion of Ukraine.

Yet despite the prospect of a hostile reception, the Russians continue to come. Long traffic queues are building on the northern border, a 1,200-mile drive from Moscow. The price of flights to cities close to the border has risen tenfold. All the scooters in Vladikavkaz have been sold.

Russia’s Baltic borderlands of Estonia, Latvia and Lithuania have closed their doors to fleeing Russians with a visa ban, as has Poland.

About 15 per cent of those leaving Russia had previously headed to Armenia but fighting on the border with Azerbaijan has made it a less attractive destination. After Turkey, Georgia remains the most popular place to go.

The military draft may yet increase Georgian sympathy for Russians, but there is little sign of tensions abating. “As a person, I pity them,” Salome said. “But, as a Georgian, I want them out.”