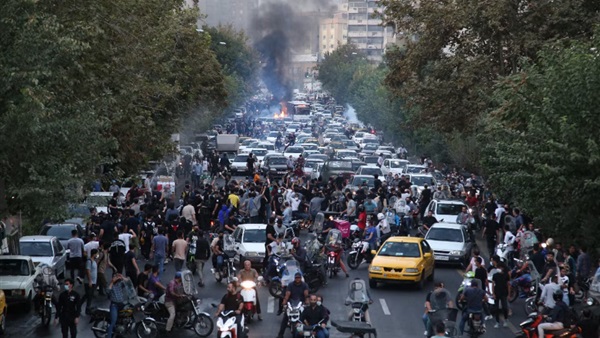 At least 35 people are reported dead in hijab protests that broke out in Iran, even as president Ebrahim Raisi said that the country needed to “deal decisively” with “those who opposed security and tranquility”, Iranian state media reported.

Mr Raisi’s comments were made in a condolence telephone call to the family of a security agent stabbed to death last week, allegedy by protesters enraged over the death of a young woman in police custody.

Mahsa Amini, a 22-year-old Kurdish woman, was pronounced dead a few days after her arrest in Tehran for wearing the hijab in an “improper” way.

On Friday, Iran’s army threatened violence against widespread and growing anti-regime protests as the president arrived home following a trip to the United Nations.

“The army is ready to defend the security and interests of the Iranian nation against the conspiracies of the enemies,” an army statement said. “The army personnel fully support their comrades in the police forces, and are ready to deal with the various plots of the enemies.”

The warning came as protesters were preparing on Friday for an eighth straight night of street battles with security forces.

“Both sides are preparing to come out in full force,” said Mehdi Hajati, a former Shiraz city council member and activist now living in exile. “Since the night before last the regime has increased repression. The people have reached a level of anger that they are already somewhere between life and death.”

Amini’s detention by the morality patrols on allegations of violating Islamic dress codes and her subsequent and still unexplained death have sparked a week of unprecedented street protests across Iran.

The impromptu evening gatherings have drawn in tens of thousands of people from across the country’s social and ethnic divisions, many of them loudly calling for the downfall of the religious police.

But the regime appeared to be preparing to ramp up its effort to crush the protests.

It has throttled internet bandwidth and shut down access to social media platforms, as well as arresting hundreds of people, including well-known activists and journalists detained at their homes.

In Gilan, a Caspian Sea province that includes the city of Rasht, at least 211 people were arrested on charges of rioting.