‘My teenage years were stolen’: Iranians on their hopes for change 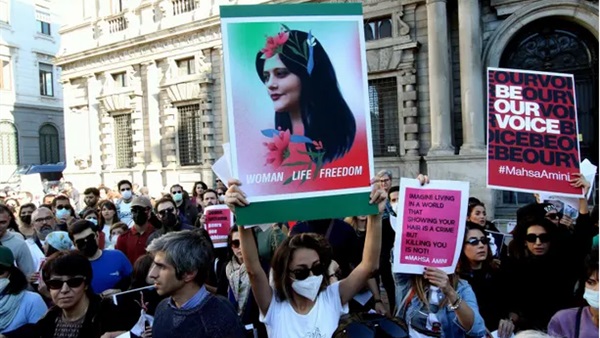 At least 92 people have been killed as Iran has cracked down on women-led protests sparked by the death of Mahsa Amini after her arrest by the notorious morality police, an Iranian human rights group has said.

Iranians abroad, including some who are only away from their homeland temporarily to study or work, have been trying to stay in touch with their families at home, as well as convey what the street protests in Iran mean to them.

Due to the threat of reprisals to their families in Iran, they fear putting their names to their views, but at the same time are eager to convey what is happening, and what they believe is at stake.

This is an interview with a group of Iranian students in a city in Italy based on interviews with friends and family inside Iran. Their identities are known to the Guardian.

“The insurrection stands for unity, freedom and equality. Just as when a dam explodes because of too much water getting reserved behind it, Iranian people have reached their limit. So they are mobilised and fight for their rightful demands. They have made themselves completely clear: they do not want to be ruled by this shameful regime and that they want a secular political system so that religious dictatorship can never happen in Iran again. So all the people, even the ones that are not on the streets, are contributing to this revolution, such as online activities, informing people and opening their doors to the wounded and the protesters who are escaping from armed forces.”

“In the 43 years of the Islamic Republic, there has been massive discrimination. Women are not allowed to exit the country without the permission of their father or husband. There have been cases that they have been killed by their father, brother or husband just to keep what they call ‘honour’. Minorities of any kind including religious, sexual orientations, other ethnicities and immigrants, never got the equal chance in any field comparing to others.”

“The one and only thing that matters in a person’s life is freedom. Restraining laws which are all based on Islamic rules has led to a full dictatorship for those who do not want to live by religious rules, which is basically almost everybody. For instance, even going out on a date is illegal in Iran, actually it’s a crime to hold hands with your partner in public if you are not married. If you are a woman, you are not able to wear what you want or sing or ride a bike! Drinking is completely illegal and arts are dramatically censored.”

“Our access to the truth is limited. Twitter and YouTube have been filtered for almost 15 years or they filtered Telegram after protests back in 2017. In this age of technology which every country is progressing through social media, Iran has been deprived of these great opportunities. Yet internationally, Mesha Amini’s hashtag has appeared 180m times on Twitter.

“We stay in touch with home mainly by texting, which they are able to connect with a very, very low speed at some points of the day using VPNs. Sometimes, you go days without being able to speak to your family. We have our closest friends who are risking their lives on the streets facing armed forces. Many of them got shot with blank bullets and beaten up with truncheons mostly within the first days, but after two to three days most of the oppressing forces have been using lethal weapons. So every single day we wake up and the first thing that we do is to somehow make sure that our families and friends are safe and not arrested.”

“Bodies are being buried in silence. My friend told me that they have killed four men on the streets and they’re refusing to deliver their bodies to their parents. They use children as soldiers and ambulances to arrest protesters.

“Their secret service agents are functioning in literally every foreign city that there are protests in. If you have followed the news, police in London, Milan, Frankfurt, and many other cities have arrested their spies while they were trying to take pictures and films of the protesters so they can open a legal prosecution against them in Iran. We also have been threatened while we were trying to organise a demonstration in the city we are living in. This is the exact quotation of the spy on WhatsApp: ‘I know ur your faces and names, all of you are going to be reported. Say bye to Iran.’”

Zahra H on being stopped by the morality police

“They told me that my clothes are too short and tried to take me. When they found out I was 15, they let me go. The streets were empty and I was alone. After that, I was scared of anyone with a black veil who approached me in the streets. I never felt safe.

“One time they stopped me and my friends biking our way to a coffee shop to have breakfast at 8am. They took our bikes and said we should retrieve them from a parking lot far away in exchange for money. They took our IDs and made us sign a form declaring we won’t do this again. When a friend of mine refused to do so, they used force to make her do it. One other time they took us by a van to the Vozara building [the facility where Mahsa Amini was taken] after stopping me and my classmate for improper hijab. They made us hold up a plaque with our credentials on it and took our pictures like criminals.

“Their behaviour was very rude and hostile. They pushed us, threatened us by saying words like, ‘You can’t go to university any more if we catch you one more time’, and spoke to us in a very harsh manner. I was shaking the whole time. I felt like I was violated. I was never able to hang out with my male friends in public because if they would have seen us, my male friend would have been taken. I always feel like my teenage years have been stolen from me.”

“For a long time, the majority of people used to believe that this regime can be reformed in good ways and used to vote for every election, although it is now realised that all of them were preselected. But in the past decade, people have come to an understanding that this devil regime is not to be reformed, but to be changed.”