US President Biden praises Egypt for its stance on Ukraine and Gaza, Renaissance Dam, Palestinian cause and Terrorism top the discussions of Sisi and Biden 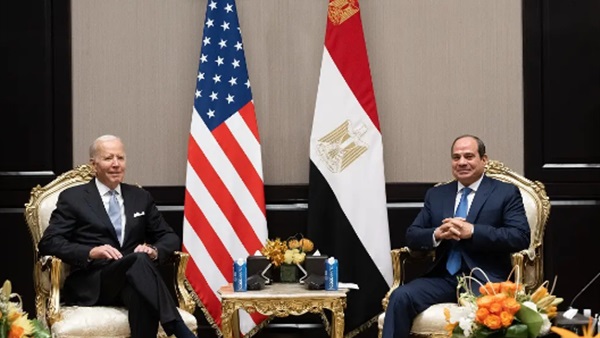 After landing in Sharm el Sheikh, President Biden met with President Abdel Fattah el-Sisi of Egypt, on the sidelines of the COP27 World Climate Summit.

Egypt’s official spokesman said that El-Sisi welcomed Biden's visit to Sharm el Sheikh, Then moved on to the bilateral relationship with the United States, telling that there has “always been common understanding” between the two countries.

“Thank you, thank you,” Biden says to polite applause, then thanking the Egyptian president El Sisi “for bringing us toegther at this pivotal moment”.

Calling Egypt’s hosting of COP27 “appropriate,” Mr. Biden praised Egypt for its role as a regional mediator between Israel and Palestinians in the Gaza Strip and said he appreciated Egypt voting with the U.S. on a United Nations resolution condemning Russia’s invasion of Ukraine.

He said he hoped to say the relationship was stronger by year’s end.

“In the face of Russia’s war in Ukraine, Egypt has spoken up strongly in the United Nations and that is appreciated very much as well,” he said.

Addressing the COP27 climate conference, Biden vowed that the United States was on track to slash its carbon emissions, urging all nations to ramp up their own efforts to avert catastrophic global warming.

“The climate crisis is about human security, economic security, environmental security, national security and the very life of the planet,” Biden told an audience at the COP27.

Biden said the United States is “on track” to achieve its pledge of cutting emissions 50-52 percent below 2005 levels by 2030.

“To permanently bend the emissions curve, every nation needs to step up. At this gathering, we must renew and raise our climate ambitions,” he said.

“The United States has acted, everyone has to act. It’s a duty and responsibility of global leadership.”

President Biden valued the strength of Egyptian-American relations, and stressed that the USA considers Egypt a reliable friend and ally in the region, in light of Egypt's political weight, its balanced role in its regional environment, and its contributions, led by President Sisi, to achieving stability for all the peoples of the region.

The US President praised the success of the Egyptian efforts to confront terrorism, under the leadership of President Sisi, and expressed the US administration's support for these efforts, stressing that Egypt is a central partner in addressing the challenge of cross-border terrorism.

The meeting also touched on the issue of the Renaissance Dam, and the Egyptian President affirmed his country's commitment to preserving its water security for current and future generations, and hence the importance of the American role to play an influential role to resolve this crisis.