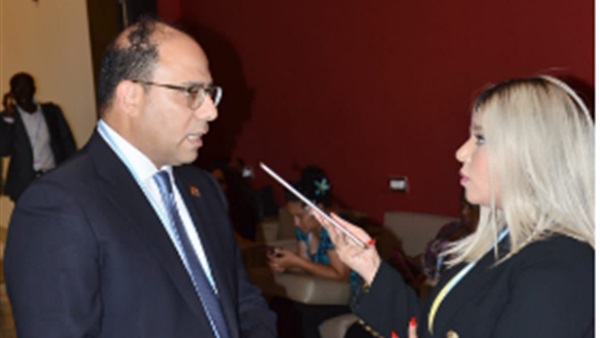 The Egyptian presidency of COP27 has a goal of turning the conference into one of implementation.

It succeeded in including loss and damage as an item on the agenda of the conference, for the first time.

The issue of financing is also strongly present on the same agenda. There is interest in finding non-traditional financing sources. This is the first time youth are included in the agenda of the conference as a theme.

The agenda of the summit includes 12 thematic days. These days discuss essential topics, such as finance and adaptation, youth, and carbon reduction, among others.

The same days focus on the initiatives and the goals of the conference.

In this interview with Egyptian Foreign Ministry Spokesman, Ambassador Ahmed Abu Zeid, al-Bawaba News digs deeper into the goals of the conference and Egypt's aspirations, especially in relation to the issue of finance.

Sir, do you think this edition of COP27 is different from previous editions? What can the Egyptian Foreign Ministry provide to the conference through Egypt's presidency of it? What are the important achievements we have made so far?

-It is important to note in the beginning that the Egyptian presidency of COP27 has set its sights on the goal of turning this conference into one of implementation. It works towards implementation, and not just pledges. Holding this conference amid an international situation with many economic and geopolitical challenges, a significant rise in prices, and a food and an energy crisis could have distracted global attention from the priorities of international climate action. Therefore, the Egyptian presidency has been keen on communicating with all international partners participating in the conference to ensure that topics are identified in a way that responds to the current crises and offers solutions to these crises by ensuring that we reach consensus on topics on the agenda of the conference and also immunizing the conference against controversial issues so that the focus can be on these topics. These topics include adaptation, emission reduction, financing and mobilizing advanced countries to help less developed ones deal with the effects of climate change and the issue of loss and damage. The Egyptian presidency, in co-operation with other countries, succeeded in putting on the agenda, for the first time, loss and damage, which is a very important topic. Developing countries attach special importance to this issue. All countries agree on this agenda.

As for the issue of financing since 2015 and the signing of the Paris Agreement, less than $1 billion have been raised over the past seven years. This is less than the amount of money required in one year. Are you optimist about the ability of COP27 and the Egyptian presidency to make progress on this financing file, especially since Africa is the continent that needs this financing the most?

-The roundtables of the conference, which started two days ago, its 12 thematic days, and the initiatives proposed by the Egyptian presidency in co-operation with its partners were designed in a way that reflects the importance of financing as an issue. The Financing Day was held on November 9, almost five days ago. The activities that were organized on the margins of the conference, in relation to financing, were keen to bring all partners on the table together. It also brought countries interested in the same issue, including advanced countries, and international financing institutions, central banks, the World Bank, the private sector and charities. All these entities met to discuss means of reaching non-traditional financing sources that can boost climate action and address the challenges of climate change. This came amid difficult and unprecedented economic conditions. There is interest in finding non-traditional funding sources, including easy-term loans, and incentivising the private sector to invest in environment-friendly projects and others that support climate action in general. The countries and entities meeting also discussed means of increasing investments in renewable energy, the transformation to new energies, reducing dependence on carbon, and using green hydrogen. The issue of financing is present in the conference and very strongly at that, including in negotiations among negotiating teams and in the activities that take place on the margins of the summit. This issue unites all partners who pay special attention to it, especially with the current conditions of the international economy.

The Youth Day was held a few days ago. Everybody saw COP27 President, Sameh Shoukry, standing side by side with UNICEF youth. He asked them to speak so that he can hear their voices. The meeting reflected Egypt's keenness on giving voice, not only to local youth, but also to international youth, especially during this summit. What about this?

This is the first time the topic of youth has been introduced and included in discussions on climate action and climate change, in general. The Egyptian presidency has included this topic among the topics discussed during the conference, not necessarily within official negotiations. It shows that we are dealing with the challenges that future generations and the youth of today may face. They want to lead a stable life and not be greatly affected by the effects of climate change, the scale of natural disasters that occur every day from rains, floods, and fires and their devastating effects on the economies of countries. Therefore, there is keenness to protect future generations against those disasters.