Tutankhamun’s tomb: how The Times unearthed the world’s biggest story 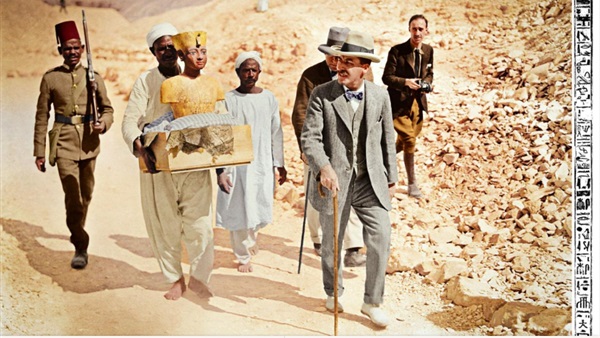 On November 30, 1922, The Times broke the news: the British archaeologist Howard Carter and his financial backer Lord Carnarvon had discovered an intact royal tomb in the Valley of the Kings.

Arthur Merton, this newspaper’s Cairo correspondent, described Tutankhamun’s tomb as “the most sensational Egyptological discovery of the century”. It was also a monumental scoop: the story of 3,300-year-old buried treasure captured public imagination across the world, and every newspaper was hungry to report on the fabulous contents of the tomb.

Merton had been tipped off by his friend Carter. On January 9, 1923, Carnarvon signed a contract with The Times: in exchange for £5,000 and 75 per cent of the syndication profits, the paper would have exclusive rights to distribute all news and pictures from the tomb, as its secrets were gradually revealed.

This ignited a media firestorm. Rival British newspapers were livid that The Times had cornered the story of the century. Many Egyptians were infuriated at having to learn of events in Egypt second-hand from a British newspaper. Carnarvon was accused of greed, “prostituting pure science to commercialism”.

Each newspaper sent out a star reporter to try to ruin The Times’s scoop by reporting the news first, “a spoiler” in newspaper parlance. The Times in turn assembled a crack reporting team to see off the opposition and ensure that its “exclusive” remained just that.

And so the stage was set for one of the greatest Fleet Street battles in history: a story of bribery and corruption, chequebook journalism, secret codes and seduction, drunkenness, inflated expenses, British imperialism, Egyptian nationalism, French scheming and bitterly feuding hacks.

To back up Merton, The Times dispatched Harry Perry Robinson, a veteran reporter, novelist and diehard imperialist who had spent more time at the Front during the First World War than any other reporter. (His method of getting to sleep during a bombardment was to imagine he was playing a round at Dulwich & Sydenham Golf Course.) Robinson was accompanied by Harold Moyne, the paper’s head messenger, a burly former soldier who could be relied on in a scrap. The photographer Herbert Warhurst completed the Times contingent.

Ranged against them were Fleet Street’s finest: the travel writer HV Morton, reporting for the Daily Express; Arthur Weigall, a novelist, set designer and Egyptologist appointed special correspondent by the Daily Mail; the “peppery” American journalist AH Bradstreet, reporting for the New York Times; and a mysterious freelancer, “Miss Johnson”, who does not appear to have done any reporting: she may have been a girlfriend of one of the other journalists, but it is also possible she was a mole, inserted into the rival camp to gather intelligence.

The unofficial leader of the anti-Times coalition was the Reuters correspondent Valentine Williams, a prolific crime writer whose war service on the Somme had left him with a serious injury, a medal and a drink problem. (He later joined MI6, where his main claim to fame was the vetting and employment of the KGB spy Kim Philby.) Williams brought along a secret weapon in the shape of his attractive young wife, Alice.

In early February 1923, the journalists checked in to the luxurious Winter Palace Hotel at Luxor, and immediately began spying on the Times reporters, and on each other.

Weigall self-righteously claimed that The Times’s monopoly was damaging British relations with Egypt. The American Bradstreet described himself as “a fervent disciple of the full freedom of the press, competitive and totally open”. In truth, they were mostly motivated by sour grapes: the only thing more satisfying than obtaining a scoop was wrecking someone else’s.

Relations started frosty and swiftly turned Arctic. The “Combine” (as Merton dubbed the opposition) held a secret “council of war” and then set about trying to discover what was going on inside the tomb by various nefarious means. They bribed porters and diggers, pooled information, complained endlessly to the Egyptian authorities and held lavish dinners for local officials, hosted by Alice Williams, in the hope of gleaning information. Williams appeared to be trying to flirt her way to the story: she was spotted by the Times contingent “squeezing the hand” of an Egyptian.

“Our rivals began to get restless at getting very little news,” Robinson reported. Most of the reporters also wrote fiction; deprived of hard facts, some simply imagined what might be inside the tomb. HV Morton penned lavish eyewitness descriptions of treasures he had not actually seen.

Convinced that the opposition was bribing the telegraph and postal clerks to leak their dispatches (an early version of phone hacking), Merton sent reports under the pseudonym “George Stylianos” and adopted a code for key figures in the drama: the Daily Mail was “Aeroplane”; Carter was codenamed “Ankor”; Carnarvon was “Séance”, and so on.

Tension between the two sides steadily rose. “Combine now getting rude, and not even a good morning for the Times staff,” reported Robinson. After a day spent drinking champagne, a “fuzzled” Valentine Williams accosted Robinson outside the hotel and accused the Times correspondent of spying on him. “Don’t be silly,” said Robinson. “As if The Times would follow you about or even care to know what you were doing; in fact, we have all the information about ‘Tut’ we require, and it is hardly likely any information you have is of any use.”

Reports had to be sent by wire from Cairo, and the approach of the daily deadline saw “a spirited dash across the desert to the banks of the Nile upon donkeys, horses, camels and chariot-like sand-carts in a race to be the first to reach the telegraph offices”. When they got there, “the rush by reporters for the few available telegraph machines frequently touched off a rash of physical confrontations”.

For Edwardian newspapers, the pharaoh’s magnificent tomb reflected the glory of the British Empire. The world was in the grip of “Tut-mania”, and newspapers were prepared to go to extraordinary lengths, and great expense, to get the story.

Within a few weeks, the Times team had racked up costs of £3,500, roughly equivalent to £170,000 today. “The expenses are the devil,” Robinson wrote gleefully to head office, knowing this was one expenses claim that would never be queried. “The amount of money that goes in daily boat and donkey hire is horrid.”

Carnarvon and Carter were baffled by the spectacle of the press pack in full cry. “Neither of us having much experience of Press sharks,” Carnarvon wrote, “one is rather at a loss to know how to act for the best.” Returning home, the peer found himself under attack from all sides, except The Times. He comforted himself by slaughtering lots of animals on his estate: “I have had a very tiring and trying time since return, the papers are chief offenders. However, I killed 1,700 head, nearly all rabbits, & 500 the next day.”

In the hotel lobby, Merton was making notes when he sensed Alice Williams behind his back, trying to read what he was writing. In large letters he wrote in his notebook: “It is unladylike and rude to look over my shoulder.” Williams stormed off.

One morning Weigall of the Mail spotted Carnarvon entering the tomb with a smile on his face. Cattily, he remarked: “If he goes down in that spirit, I give him six weeks to live.” This casual remark was remembered when Carnarvon subsequently cut himself shaving a mosquito bite and died of blood poisoning, giving birth to the enduring legend of the “mummy’s curse”. Weigall went on to write numerous articles about “the malevolence which is supposed to linger around the bones of the ancient dead”, a disgruntled hack spreading fake news.

On February 17, 1923, the day secretly set for penetrating the inner chamber containing the sarcophagus, the press pack got wind of what was afoot and perched in a row on the wall above the entrance. Alice Williams and Miss Johnson brought along their knitting. The Times team sent out a red herring rumour, to the effect that no fewer than eight mummies had been found, misinformation that found its way into at least one paper. Valentine Williams intercepted a workman, discovered the chamber had been entered, and slipped off to report the news without telling the others: he got the headline, but not the details.

At midday Robinson filed the famous dispatch: “Opening of the Tomb. Seals Broken. A Magnificent Spectacle...” His editor was delighted: “I cannot recall a great news occasion on which the Daily Mail has been so completely beaten . . . You have secured a very great triumph for The Times.”

In reality, like most overheated media contests, this one ended in a draw: the story spread quickly, and afterwards only the protagonists could remember who had won the race into print. The Times syndication service ended up with a loss of £2,500, not including the horrid costs of donkey hire.

But the Egyptians had the last laugh.

Egypt declared its independence in 1922, and many Egyptian nationalists deeply resented the way that the excavation was dominated by British experts and exclusively reported in The Times. An editorial in Al-Ahram, an influential newspaper named after the Pyramids, declared that “Lord Carnarvon is exploiting the mortal remains of our ancient fathers before our eyes, and he fails to give the grandchildren any information about their forefathers.”

Under the terms of his concession, Carnarvon was also planning to lay claim to some of the treasures and take them back to Britain.

The newly appointed nationalist minister of public works, Morcos Bey Hanna, had good reason to resent the British, who had arrested him for treason during the 1919 revolution and tried to have him hanged. The director-general of the Antiquities Service, a canny French Jesuit named Pierre Lacau, was also strongly opposed to the Times monopoly. Carter’s rival in Egyptology, Lacau firmly believed that all the discovered artefacts belonged in principle to the new Egyptian government.

In February 1924, Carter opened the sarcophagus lid, and invited the wives of expedition members to inspect the site. Lacau and Hanna spotted their chance to stymie Carter, The Times and the British, all in one go.

They banned the visit and sent in Egyptian police to guard the entrance. Enraged, Carter posted a notice in the lobby of the Winter Palace Hotel, announcing his withdrawal from the excavation on account of “the impossible restrictions and discourtesies of the Egyptian Public Works Department”.

This played straight into the hands of the Egyptian authorities. By breaking the terms of his licence, Carter relinquished full control to Lacau and the Egyptian government. The Times monopoly was ended. Celebrating Egyptians took to the streets, chanting: “Viva Morcos Pasha Hana, minister of Tutankhamun.”

When Carter finally resumed the excavation in 1925, he did so entirely on Egyptian terms: all the tomb’s treasures would remain in Egypt.

The journalists’ battle over Tutankhamun’s tomb was ludicrous and short-lived, but it had lasting consequences: it sparked the mythical curse of the pharaohs, ensured these priceless artefacts remained Egyptian, and set a precedent for the modern media feeding frenzy.

As is written on one of the golden shrines that surrounded Tutankhamun’s sarcophagus: “I have seen yesterday; I know tomorrow.”