An Egyptian treasure..On this day 100 years ago 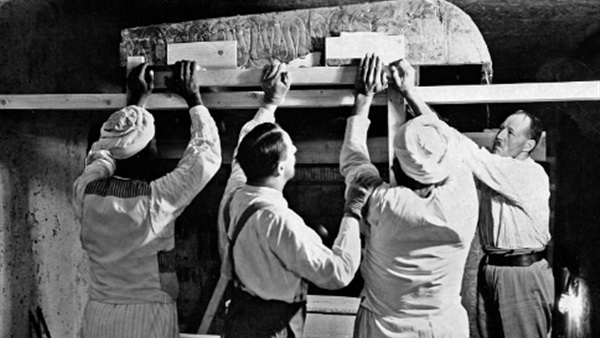 Valley of the Kings (by runner to Luxor), Nov 29: This afternoon Lord Carnarvon and Mr Howard Carter revealed to a large company what promises to be the most sensational Egyptological discovery of the century. The find consists of the funeral paraphernalia of the Egyptian King Tutankhamen, one of the famous heretic kings of the Eighteenth Dynasty.

The discovery announced today is the reward of patience, perseverance, and perspicacity. For nearly sixteen years Lord Carnarvon, with the assistance of Mr Howard Carter, has been carrying out excavations on the west bank of the Nile at Luxor. From time to time interesting data were unearthed, but nothing of a striking character was found.

Seven years ago work was started in the Valley of the Kings, after other excavators had abandoned it. Here, again, the excavators had little success. At times they almost despaired, yet did not lose heart. At last the dogged perseverance of Mr Carter, his thoroughness, above all his flair, were rewarded by the discovery, directly below the tomb of Rameses VI, of what looked like a cache. Mr Carter covered up the site, and telegraphed to Lord Carnarvon, who at once came out from England. By this time news of the find had got about.

The whole of Luxor, where everyone down to the smallest urchin is an antiquity hunter, was agog. Would one of the missing kings be found inside? Was it the tomb of a queen or a high member of the Court of ancient Egypt? Little, however, did Lord Carnarvon and Mr Carter suspect the wonderful nature of the contents of the chambers as they stood outside. The sealed outer door was carefully opened, then a way cleared down some sixteen steps along a passage of about 25ft. The door to the chambers was found to be sealed as the outer door had been. An entrance was effected, and when at last the excavators squeezed in an extraordinary sight met their eyes, one that they could scarcely credit.

On the occasion of the official opening, Lord Carnarvon’s daughter, Lady Evelyn Herbert, entertained a large party at luncheon at the Valley of Kings, including Lady Allenby and Abdel Aziz Bey Yehia, Governor of Kena Province, who has assisted greatly in safeguarding the treasures.