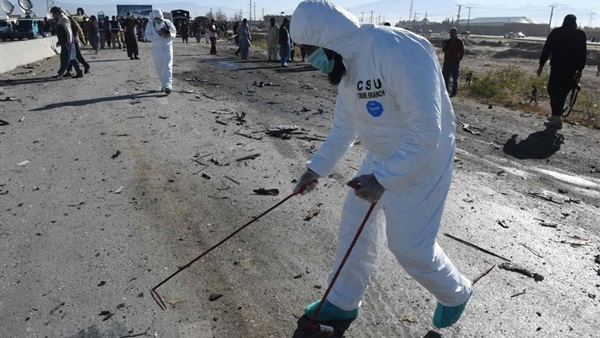 An attack claimed by the Pakistani Taliban killed at least four people Wednesday, just two days after the group announced the end of a shaky cease-fire.

An explosion hit a truck carrying policemen on their way to be deployed as security for polio vaccinators, outside the western city of Quetta. The Civil Hospital in Quetta said that it received four dead and 29 injured.

Pakistan, one of just two countries where polio remains endemic, is trying to eradicate the crippling childhood disease. Vaccinators, who go from house to house to immunize young children, have come under attack from extremists for years, so they work with police protection. But the presence of security forces also makes them targets.

Months of on-off talks with Pakistani authorities resulted in a cease-fire that was in place with the Pakistani Taliban until this week. The militant group ended that Monday, saying that its fighters were being hit in operations by security forces.

The Taliban, which seized power in Kabul in August 2021, has said it wouldn’t allow its soil to be used against other countries. But Islamabad says that the leadership and many of the militants of the Pakistani Taliban are based across the border in Afghanistan. The Pakistani militants, who are close to al Qaeda, operate largely independently from the Afghan movement which inspired them.

Pakistan’s deputy foreign minister, Hina Rabbani Khar, visited Kabul Tuesday, and held talks with the acting foreign minister from the Taliban regime there, including discussion of countering terrorism, according to a statement from Islamabad.

In Quetta, a senior police officer, Ghulam Azfar Mahesar, said that a rickshaw rammed into the police truck. The toppling over of the truck caused some of the casualties, with one policeman killed and 20 wounded—two of them seriously injured. Passersby also got caught up in the blast, he said. Polio health workers weren’t present.

The body of a bomber was found at the scene, said Mr. Mahesar. It was unclear if a suicide vest or explosives in the rickshaw detonated, he said.

The Pakistani Taliban claimed responsibility for the bombing in a statement, warning that “our attacks will continue.”

Pakistan was accused by the previous U.S.-backed Kabul government for years of backing the Afghan Taliban, a charge that Islamabad had always denied. Islamabad’s links haven't been enough to push the Taliban government to act against the Pakistani Taliban, but the Taliban has brokered talks between the two sides.