Joy as Afghan lives are rebuilt from the rubble 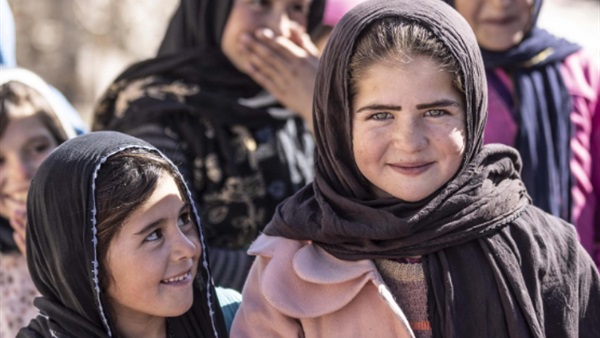 The night the Taliban attacked Lokah Mazar, Ghulam Sarwat was at home in his mud-built house below a distinctive rocky crag jutting up from the centre of the village.

The Taliban’s target was a government outpost built on top of the crag by Sarwat’s house, defended by a handful of outgunned Afghan police. “Suddenly we heard firing from every direction,” he remembers. “The Taliban had surrounded us.”

Amid the chaos, he heard the victorious fighters declare they had shot dead one of the policemen, captured two others and seized the strategic outpost with its view across the whole valley.

When the firing died down, Sarwat took his wife and four children and fled to a neighbour’s house. Minutes later, he heard an aircraft and a massive explosion and when he returned in the morning, he found the house reduced to rubble. A government plane sent in to bomb the Taliban had missed the outpost but flattened his house.

“I cried,” Sarwat says. “It was still burning. We managed to pull out a few things, a couple of blankets. Everything else was lost.”

Lokah Mazar, abandoned by its fleeing inhabitants that night, was one of the last casualties of the Taliban’s 20-year fight to regain the power they lost in 2001 after the 9/11 attacks. The battle for the village, in May last year, took place three months before the Taliban rode in victory into Kabul and seized control from the government.

Even before 9/11, Afghanistan had not known peace for more than two decades, following the Soviet invasion and the mujahidin civil wars that broke out after Moscow’s retreat. The Taliban takeover in August 2021, referred to by many as simply “the change”, came as a shock to many.

The western military intervention had become unpopular amid shocking levels of civilian casualties and the western-backed Afghan government was reviled for its corruption. Nonetheless Afghans were unprepared for the sudden collapse of their economy with the withdrawal of international money that had kept the country afloat.

Lokah Mazar had never benefited much from outside assistance and five years of active conflict had put it out of bounds to aid agencies. The Taliban takeover would have one immediate effect for the villagers, now scattered to relatives’ houses across Ghor.

“When we heard that all the provinces and Kabul had been taken by the Taliban we realised there would be no more fighting so we could go back,” said Parirukh, 70. Her son, Abdul Rapur, had been killed two years before when he was caught in the crossfire while collecting firewood. When Parirukh returned with her widowed daughter-in-law and grandchildren, they found their home next to Sarwat’s had also been hit in the bombardment. “It was no less than a death to see our home destroyed,” she lamented. Already living beneath the poverty line, they despaired of ever being able to afford to rebuild.

Abdul Hakim Rahamatin, a civil engineer for Afghanaid, was the first aid worker to reach the village in early summer this year. He found 100 homes destroyed and hundreds more badly damaged and swiftly concluded that the village needed Afghanaid’s help to rebuild.

“Almost everyone here was affected by the war,” he recalls. “They had no shelter and safe place to live and no means to rebuild themselves.”

Building work began over the summer this year and last week, with snow already lying on the hills above the valley, families began to move into the newly constructed homes. The houses, built to a common aid agency standard, cost Afghanaid only £1,200 to £1,500 to construct, depending on the size of the family who would live there. “The villagers have never seen Dubai or Turkey but now they all think it is like Dubai,” Rahamatin laughs. “Perhaps not, but they are very good houses for them. We’re proud of what we’ve done.”

Ramazan, 30, moved into his new house ten days ago with his wife and five children. The home built by his father that he grew up in was destroyed in the fighting. “It was a government airstrike,” he says without bitterness. “But if the Taliban hadn’t come, they wouldn’t have bombed us at all.”

Lokah Mazar’s setting is idyllic, set on the pebbled banks of the Hari river with silver birch trees lining the fields and crags soaring up from the valley.

However, the conflict turned it into a cauldron of violence, with villagers caught between government forces on one side of the river and Taliban insurgents on the other. The construction of the lookout post, with views across the valley, only made it a more alluring target for the Taliban as they sought to march on to the district capital.

“Our village became the centre point of the war,” Ramazan says. “We were caught in between both sides.” In all, the village lost 70 of its residents, some in crossfire, others to roadside bombs laid by the Taliban.

At least 20 young men were killed in fighting after joining up to the national police, army or Taliban, unable to find any other employment. It is a familiar tale that has only served to fuel the conflict; the desperate lack of opportunity that has seen thousands of young men take up arms to feed their families.

Ramazan’s only income comes from farming his own small plot and as a daily labourer on others, unstable and irregular employment.

Without Afghanaid he could not have found the money to rebuild. “I would have pitched a tent next to the ruins and we would have lived there,” he says. “I am so happy to be here now and I hope that we can finally start living in peace.

Parirukh’s household, headed by her daughter-in-law Farkh, is one of those designated as in particular need because of the obstacles Afghan women face in earning income. Fully 100 per cent of Afghanistan’s female-headed households have been categorised as without sufficient food as the country’s hunger crisis deepens. Neighbours have donated food, blanket and cooking equipment to replace those they lost in the bombardment but Afghanaid will also supply them with emergency food to see them through the winter months ahead.

Sarwat, who moved into his new home three days ago with his wife and children, could not stop smiling as he surveyed his new house.

“I am so happy, so grateful,” he beams. “I could not have begun to rebuild it myself. I give prayers of thanks every day.” His two eldest sons had left to find work in Iran after the house was destroyed to earn the money to rebuild but the economic crisis there had made the pickings thin.

“I have told them to come home now because we have a new house,” he says. “When they return, we will have a celebration with them and all our neighbours too and welcome everyone who has come home at last.”

Readers have brought the total raised for The Times and Sunday Times Christmas Appeal to more than £300,000 in just one week.

Thousands have donated online and through the phone line to Magic Breakfast, the Campaign Against Living Miserably (CALM) and Afghanaid, raising £248,000. With match-funding arrangements, that takes the total above £300,000.

The fundraising feat is already £100,000 higher than at the same stage in last year’s appeal. In the coming weeks The Times and The Sunday Times will continue to feature stories from our three chosen charities.