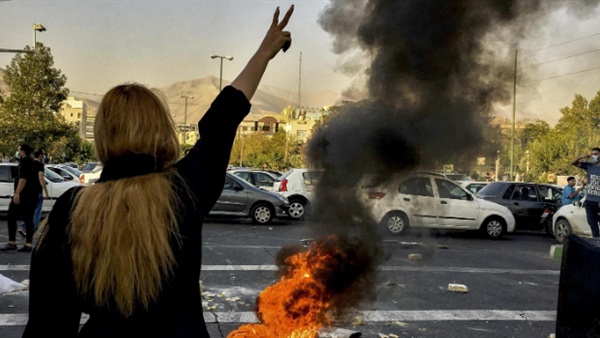 The sister of Iran’s supreme leader has said that she hopes the ruling “tyranny” of her brother, Ayatollah Ali Khamenei, will soon be overthrown as she called on the country’s feared revolutionary guards to lay down their arms.

“I think it is appropriate now to declare that I oppose my brother’s actions and I express my sympathy with all mothers mourning the crimes of the Islamic Republic regime,” the long-dissenting Badri Hosseini Khamenei said in a letter shared on Twitter by her French-based son, Mahmoud Moradkhani.

Support for the Islamic regime has never been in the blood: Badri’s family have been fierce critics of her brother’s rule and the former Islamic regime since the 1979 revolution overthrew the western-friendly Shah.

Her husband, Ali Tehrani, was a prominent dissident and cleric who she followed into exile during the Iran-Iraq war in the 1980s. When the pair returned to Iran in 1995 he was jailed for 10 years, before dying this October.

“Our family’s opposition and struggle against this criminal system began a few months after the [1979] revolution,” she wrote. “The crimes of this system, the suppression of any dissenting voice, the imprisonment of the most educated and the most caring youth of this land, the most severe punishments, and the large-scale executions began from the very beginning”.

The letter condemned the authorities’ violent crackdown on the nationwide protests that have rocked Iran for almost the past three months.

“I am sorry that due to physical ailments, I cannot participate in protest movements as I should. But in heart and soul, I am with the people of Iran,” it read.

The open letter could be a dangerous move for Badri, who still lives inside Iran. Her daughter, Farideh Moradkhani, a prominent activist, was arrested in November after calling on foreign governments to cut all ties with Tehran. She had already been arrested for her activism on two occasions before the latest protest movement. In a video released on YouTube, Farideh described her uncle’s regime as “murderous and child-killing”.

While Badri, as well as her husband, used to regularly speak out against the Islamic regime when they lived in exile in Iraq, she has shied away from publicly denouncing the regime since her return to Iran.

“When they arrest my daughter with violence, it is clear that they apply thousands of times more violence to other oppressed boys and girls who are subjected to inhumane cruelty,” the letter read.

As Badri released her plea for Iran’s elite guards to lay down their weapons, they called on the judiciary to “not show mercy to rioters, thugs and terrorists” as they continue their fierce crackdown on the protestors.

The letter came as Mohammad Khatami, the long-silenced former president, issued a statement to put further pressure against the regime and support the protests. He described the protest chant of “woman, life, freedom” as “a beautiful message that shows movement towards a better future”, according to the Iranian Students’ News Agency.

“Freedom must not be trampled on in order to maintain security,” the reformist president who served between 1997 and 2005 said.

Badri accused her brother of not listening to the “voice of the people in Iran” and instead only considering the voices of “mercenaries and moneygrubbers”. She said: “Ali Khamenei has brought nothing but suffering and oppression to Iran and Iranians.”