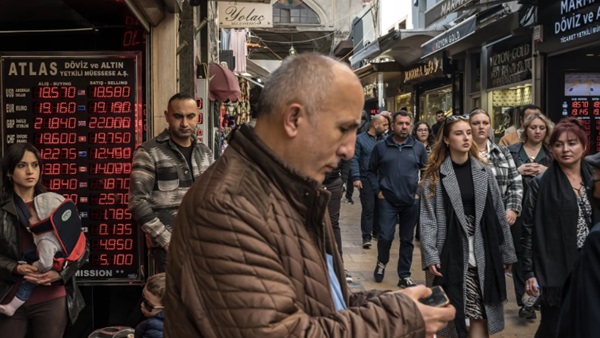 As Turkey’s annual inflation rate has soared above 80 percent, families are being forced to stick with worn-out clothes and shoes and to cut meat from their diets while some struggle to afford school lunches for their children.

Exacerbating the country’s worst inflation crisis in more than two decades, economists say, are the unorthodox financial policies of President Recep Tayyip Erdogan, who has insisted on lowering interest rates in defiance of a broad economic consensus that inflation is best controlled by raising them.

The belt-tightening is so severe that it has soured many voters on Mr. Erdogan, Turkey’s paramount politician for nearly two decades, leaving him politically vulnerable as he prepares to run for re-election next year.

Year on year, inflation was 84.4 percent in November, according to data released on Monday by the Turkish Statistical Institute. That was a slight decline from 85.5 percent in October, the highest rate in 24 years. Some economic monitors say the real rate for many of Turkey’s roughly 85 million people is much higher.

The lower rate was unlikely to provide immediate relief for most people, but the government said it represented a turning point.

“We have entered a downward trend in inflation, leaving the peak behind, unless there is an unexpected global development,” Turkey’s finance minister, Nureddin Nebati, wrote on Twitter.

The blow of rising prices has fallen particularly hard on the poor and the middle class.

More than half of working Turks earn around the minimum wage, which is worth less than $300 a month because of the Turkish lira’s vast devaluation against the dollar. As the lira has sunk, people have watched their salaries lose purchasing power and the value of their savings evaporate.

“There is no way to earn a decent rate of return on what you have saved in this country, so there is this massive wealth destruction,” said Atilla Yesilada, an analyst with GlobalSource Partners. “I am sure there are winners in this, but the vast part of society is seeing their savings melt away by the day.”

Turkey’s crisis has been years in the making, as political turmoil and what critics call Mr. Erdogan’s slide toward authoritarianism have made the country less attractive for many investors. Turkey has a substantial trade deficit and significant foreign debt, and the government has tapped its foreign currency reserves to try to slow the collapse of the currency.

The coronavirus pandemic cut deeply into tourism income, and upheaval in global markets exacerbated by Russia’s war in Ukraine made inflation a threat to economies around the globe.

But while other countries raised interest rates to keep prices in check, Mr. Erdogan has repeatedly cut them.

Last month, the International Monetary Fund recommended that Turkey raise the interest rate to counter inflation and grant more independence to its central bank, which is widely seen as doing Mr. Erdogan’s bidding. But in late November, the central bank lowered rates yet again, to 9 percent, the most recent of a series of cuts that have brought the rate down from 14 percent in August.

In a range of interviews, Turks mourned the once-normal items that rising prices have turned into luxuries or pushed from their budgets altogether: chicken, weekend outings with their children, deodorant.

“Every day, the money is melting,” said Mehmet Kaya, a car mechanic in Adana.

The price of motor oil had gone up four times since the crisis began in 2018, he said, and prices had also risen for everything else he needed for his shop. At home, the amount of money required last year to fill his car’s trunk with groceries now bought only two bags.

In speeches and interviews, Mr. Erdogan has described low interest rates as part of a plan to foster economic growth by stimulating manufacturing and making Turkish products more attractive for export. He has blamed the country’s economic woes on unspecified foreign forces while suggesting that Turkish families are in fact better off than people in wealthier countries.

Mr. Erdogan has tried to play down inflation, saying it is not a crippling economic threat and vowing that the government would take action against exorbitant price increases.

“We expect from our citizens a bit more patience and strength,” he said in a televised statement last month.

But in the U.S., inflation has fallen to under 8 percent annually, after interest rate increases, while yearly inflation in Turkey is more than 10 times that rate.

To soften the blow, Mr. Erdogan’s government has increased the minimum wage twice since January, funded accounts to protect savings in local currency from devaluation, launched a multibillion-dollar housing subsidy program and backed other projects to help the poor. The economy has continued to grow, expanding by 11 percent in 2021, suggesting a recovery from the pandemic; economists expect more modest growth of around 5 percent this year.

But the spiraling prices for many Turkish families threaten to tarnish the legacy of Mr. Erdogan, who was lauded during much of his two decades in power for overseeing vast economic growth that moved millions of Turks from poverty toward more comfortable, middle-class lifestyles.

Many of those people now see those gains slipping away, which has damaged Mr. Erdogan’s political standing to such an extent that a number of polls now suggest that he could lose next year’s election.

One recent poll by Mehmet Ali Kulat, who has consulted for both Mr. Erdogan’s governing party and members of the opposition, found that 36 percent of respondents said they would vote for Mr. Erdogan and 44 percent would vote against him, regardless of who his competitor was. Fourteen percent said they would decide based on who his challenger is, and 6 percent were undecided.

In another recent poll by PanoramaTR, a risk analysis organization, about half of respondents said they would not vote for Mr. Erdogan and less than 35 percent said they would. The group also found that two potential challengers polled significantly higher than Mr. Erdogan.

“It is mainly the economy,” said Osman Sert, the group’s research director and a former media adviser in Mr. Erdogan’s government. “If there were not an economic crisis, I do not think that Erdogan would be losing the election. The economy is making all the other problems visible.”

Some analysts caution that much could change between now and the presidential and parliamentary elections to be held in or before next June.

A new coalition of opposition parties challenging Mr. Erdogan has yet to choose a candidate and could struggle to remain unified. Mr. Erdogan has a long history as a deft political survivor and now sits at the top of a system that gives him tremendous power to make moves that could help him win votes.

He can also count on a vast party infrastructure and a core base of loyal voters who will stick by him regardless of the economy.

Melike, who cleans staircases to support her family in Istanbul, acknowledged that times were tough, pointing to a large crack in her worn-out shoes that she said she could not afford to replace.

“I don’t buy anything for myself unless I have to,” said Melike, 33, declining to give her last name. “I buy for the children first.”

But she didn’t blame Mr. Erdogan, saying that many countries were suffering from inflation and that unnamed “external powers” were making Turkey’s problems worse.

“It is not about the rulers of this country,” she said.

Also in Istanbul, three women in their 20s had spent the afternoon looking for an affordable watch for one of them — to no avail. All three worked to help their families and struggled to get by, they said.

“My salary is gone in two days and then I live on the credit card,” said Bahar Ecevit, 24, a clerk in a clothing store. Prices had gotten so high in relation to her salary that she could not afford a new winter coat, she said.

Like many young Turks, she hoped to move abroad and find a more secure future.

“We are just living for the moment,” she said. “We don’t know what we will do tomorrow.”