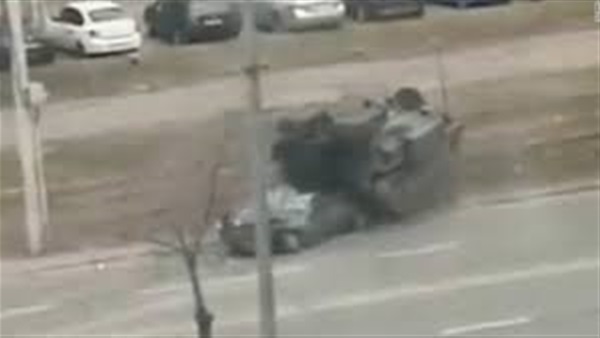 The son of a Conservative MP has been filmed helping to blow up a Russian armoured vehicle in an operation in Ukraine, according to footage obtained by the i.

Ben Grant can reportedly be heard shouting “shoot it now” and “mind the back blast” before an anti-tank missile is launched on a Russian BTR in a woodland in northeast Ukraine.

Mr Grant, 30, son of of former minister Helen Grant, Conservative MP for Maidstone and The Weald, is among group of Western volunteer fighters supporting Ukraine in the wake of the Russian invasion.

The footage captures one member of his platoon, made up of special forces, emerge from the trees and aim a Matador missle at a vehicle about 100 metres away, the i reported.

The 15-hour US-British operation, supported by a further 14 Ukrainian troops, reportedly succeeded in blowing up the armoured vehicle.

About eight Russian soldiers were allegedly killed in the attack.

It follows a second round of footage, obtained by The Daily Telegraph, which shows Mr Grant and his comrades helping to save a fellow British fighter injured by a landmine in a Kharkiv forest.

After treating the barely-conscious Mr Arthur’s leg, Mr Grant can allegedly be heard saying: “You’ve got to try and walk or we’re going to die mate.”

The fomer Royal Marine told The Telegraph that his platoon - made up 15 foreign fighters - had been ambushed by Russia after their whereabouts had been determined by drones ahead of their operation.

As they headed to a key Russia-held target near Kharkiv, the group got caught up in a “mass firefight”, Mr Grant said.

He also claims a remote-controlled mine went off near Mr Arthur, blowing “half of his leg off.”

“My God it was unreal,” he said, adding: “I’ve never experienced anything like that in my life. We extracted him for 5km through dense woodblock and awful terrain and then get him medevac-ed out of there.”

Mr Grant spent more than five years as a commando in the Royal Marines.

He was part of group of seven ex-servicemen who arrived in Ukraine in early March to fight invading Moscow forces.

Speaking to media following his arrival in Lviv, he said he chose to head to the eastern European country after watching a video of Russian forces bombing a house where a child could be heard screaming.

He said at the time: “I thought, I am a father of three, and if that was my kids I know what I would do, I would go and fight. Then I thought I would want another load of people who might be skilled enough to help me come and help me, come and help me, save my family.”

MBZ…Best successors to a great predecessor