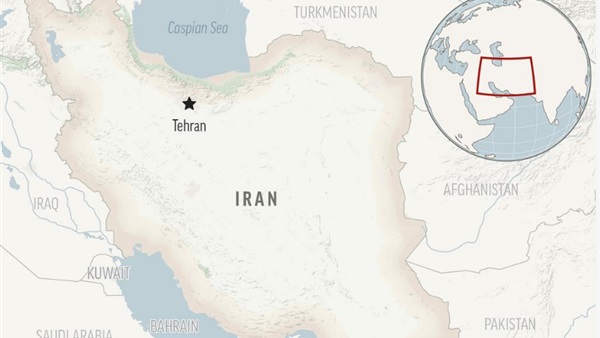 IRNA said the country’s powerful Revolutionary Guard announced the arrests of a network of people linked to the Israeli agency. It said the members had previous criminal records and tried to disrupt the country’s security.

Israel and Iran are regional arch-enemies and Iran occasionally announces the detention of people it says are spying for foreign countries, including the United States and Israel. Iran does not recognize Israel and supports anti-Israeli armed groups across the region, such as Hezbollah and Hamas.

Network members stole and destroyed private and public property and kidnapped individuals and interrogated them, according to the report. It said the alleged spies had weapons and received wages from Mossad in the form of cryptocurrency. Iranian authorities provided no evidence for any of the alleged crimes.

IRNA identified the executed prisoners as Hossein Ordoukhanzadeh, Shahin Imani Mahmoudabadi, Milad Ashrafi and Manouchehr Shahbandi. Three other members of the group received sentences of five to 10 years in prison, according to the news agency, but they were not identified., They were arrested and sentenced to death in June on charges of “intelligence cooperation with Israel.”

Iran’s Revolutionary Court regularly hands out death sentences, although it remains unclear which court charged the four men in June. The Revolutionary Court was established following the 1979 Islamic Revolution and is known for meting out harsh punishments to those who oppose Iran’s clerical rulers. According to Amnesty International, Iran executed at least 314 people in 2021, more than half the total state executions recorded across the Middle East that year.

Iran and Israel have long accused each other of spying. Israel views Iran as its greatest threat and has repeatedly threatened to take military action to prevent Iran from acquiring nuclear weapons. Iran denies it is seeking such weapons and has vowed a harsh response to any Israeli aggression.

In January, Israel said it had broken up an Iranian spy ring that recruited Israeli women via social media to photograph sensitive sites, gather intelligence and encourage their sons to join Israeli military intelligence.

In July, Iran said it arrested members of an armed group linked to Mossad after they sneaked into Iran from across its western border. In 2020, Iran executed a man convicted of leaking information to the U.S. and Israel about a prominent Revolutionary Guard general who was later killed by a U.S. drone strike in Iraq.

Israel also regularly carries out strikes on Iran-allied militant groups in neighboring Syria. Iran has been a main supporter of Syrian President Bashar Assad during the country’s 11-year civil war, sending thousands of Iran-backed fighters from around the region to fight alongside his forces. Israeli officials rarely discuss its operations but have said in the past that they will work on preventing Iran’s entrenchment in Syria.