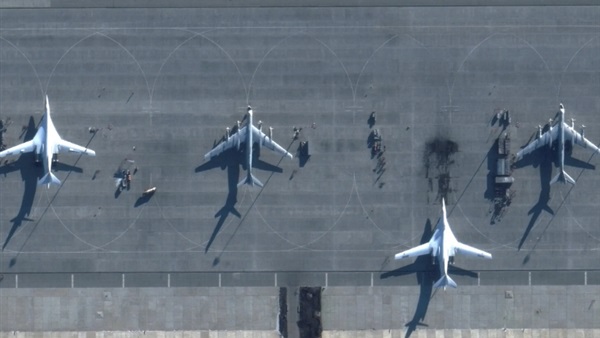 Ukraine executed its most brazen attack into Russian territory in the nine-month-old war on Monday, targeting two military bases hundreds of miles inside the country using drones, according to the Russian defense ministry and a senior Ukrainian official.

The drones were launched from Ukrainian territory, and at least one of the strikes was made with the help of special forces close to the base who helped guide the drones to the target, said the official, speaking on condition of anonymity to convey sensitive information.

The strikes signaled a new willingness by Kyiv to take the fight to bases in the heart of Russia, raising the stakes in the war, and demonstrated an improved ability to attack at a distance. Shortly after the attacks on the bases, Russia sent a barrage of missiles streaking toward Ukrainian cities.

The Kremlin said that the weapons launched by Ukraine were Soviet-era jet drones and were aimed at bases in Ryazan and Engels, about 300 miles from the Ukrainian border. It said that its forces had intercepted the drones, and that “the fall and explosion of the wreckage” had “slightly damaged” two planes, killing three servicemen and wounding four others.

The Engels airfield, on the Volga River in southern Russia, is a base for some of Russia’s long-range, nuclear-capable bombers, including the Tupolev-160 and Tupolev-95. Ukrainian officials say it is also a staging ground for Russia’s unrelenting campaign of missile attacks on infrastructure, which have left millions of Ukrainians with intermittent light, heat or water — or none at all — at the onset of winter. Security footage from an apartment complex near the base showed a fireball lighting up the sky.

The other explosion occurred at the Dyagilevo military base in the central city of Ryazan, about 100 miles from Moscow, according to Russia’s defense ministry. It was there that the fatalities and injuries occurred, the Russian state news agency RIA Novosti reported.

Ukraine’s government declined to publicly acknowledge the strikes, in keeping with its practice of intentional ambiguity on attacks in Russia and Russian-occupied Crimea. But officials have established a pattern of comments suggestive of Ukraine’s involvement.

“The Earth is round — discovery made by Galileo,” Mykhailo Podolyak, an adviser to President Volodymyr Zelensky, wrote on Twitter after the strikes at Russian bases. “If something is launched into other countries’ airspace, sooner or later unknown flying objects will return to departure point.”

On the economic front of the war, the United States and its allies on Monday took their most serious steps so far to deprive Russia of at least some of the oil revenue that is vital to its government and economy. The Group of 7 wealthy democracies began trying to enforce a $60-a-barrel cap on the price of Russian oil on global markets, and a European Union embargo on most oil purchases from Russia took effect.

Ukraine’s Western backers have refused to supply it with long-range weapons that could strike far into Russian territory, trying to avoid being drawn more deeply into the conflict. But Ukraine’s state-owned weapons maker, Ukroboronprom, said in October that it was “finalizing the development” of a drone with a 165-pound warhead and a range of more than 600 miles, and said on Sunday that it had completed tests of the weapon.

“We hope to be able to test it in combat use,” Natalia Sad, a spokeswoman for the arms maker, said on national television Sunday night.

It was not clear how Ukrainian special forces were able to infiltrate Russia, or how close to either base they got. But the car bomb assassination in August of the ultranationalist commentator Daria Dugina, believed to have been carried out by Ukrainians, showed similar capabilities.

“Ukraine’s ability to strike deep into Russian territory is not just militarily significant,” said Max Bergmann, a former American diplomat and expert on European and Russian security at the Center for Strategic and International Studies in Washington.

“It also sends a message to Russia that continuing the war is not cost-free, that it is not just Ukraine which is vulnerable to long range drone and missile strikes; so is Russia,” Mr. Bergmann said. “This is useful for Kyiv, since when or if the two countries ever sit down, a commitment to stop attacks on Russian territory is now a valuable chip Ukraine has to offer.”

Ukraine has already demonstrated its ability to use drones in new and unexpected ways, and to adapt old systems to perform new functions.

The naval harbor of Sevastopol in occupied Crimea, home to Russia’s Black Sea Fleet, was rocked by a series of mysterious explosions on Oct. 29. Footage of sleek, black maritime drones maneuvering around the bay targeting Russian warships soon emerged. Ukraine has still not acknowledged being behind the attack, but President Volodymyr Zelensky, while still not claiming credit, announced a fund-raising campaign to secure “a fleet of marine drones.”

Only a few hours after the explosions in Russia on Monday, Ukrainian officials said that more than a dozen Russian bombers had taken off from the Engels-2 air base. Air-raid alarms sounded in Kyiv, the capital, and other cities. Ukraine’s Air Force said more than 70 missiles were fired and more than 60 shot down.

“Unfortunately, we still cannot ensure complete security to our sky — there were several hits,” Mr. Zelensky said in his nightly video address. “Unfortunately, there are victims. As of this time, there are four people killed by Russian strikes today.”

Amid the volley of attacks, the remains of a missile were discovered on the territory of Moldova, to the west of Ukraine, the Moldovan Foreign Ministry said in a statement on its Facebook page. The country’s government has protested Russia’s firing missiles through its airspace to reach Ukraine.

The Moldovan government did not say when the missile, found in a snowy orchard in Briceni, a small town near the frontier with Ukraine, had crashed there, or whether it had been fired by Russia or Ukraine.

Last month, a Ukrainian air defense missile, fired against a Russian barrage, landed in Poland, killing two people. Such examples of violence spilling beyond Ukraine’s borders raise the specter of the war widening, which the Western alliance is keen to avoid.

Until Monday, it had been 13 days since the last large-scale barrage of Russian missiles fired at targets across Ukraine, the longest stretch without blasts in and around the capital since Moscow began its assault on the nation’s energy infrastructure in early October. Ukrainian officials had been warning that another attack was imminent.

Ukraine’s national energy company, Ukrenergo, wrote in a statement posted on Facebook that a “mass missile attack” was underway and had damaged electrical facilities and caused blackouts.

The governor of the Kyiv region, the administrative district around the city of Kyiv, wrote on the social media site Telegram, “Stay in shelters and safe places.”

Power failures were reported in several regions, from the northern Sumy region along the border with Russia to the southern Odesa region on the Black Sea coast, but Mr. Zelensky said energy workers immediately began working to restore service. After about three hours, air-raid warnings were lifted in some parts of Ukraine.

President Vladimir V. Putin of Russia appeared in a video made public on Monday driving a car across the Kerch Bridge, which connects the Crimean peninsula with Russia. It was not clear when the video was recorded, but it appeared to show his first visit near the combat zone since the war began in February. An explosion apparently caused by Ukrainian forces — though the government has not taken responsibility — partially destroyed the bridge in October.

Ukrainians have responded by building emergency heating shelters in towns, dispatching linemen to repair the grid as swiftly as possible and powering restaurants, stores and hospitals with generators. In hard-hit areas, residents stockpile water in bottles in their homes.

And Ukrainians have adapted. In Kryvyi Rih, a central Ukrainian city and a center of the iron mining industry, workers evacuated the mines when the alarms sounded on Monday, to avoid being trapped underground as they were in past strikes, when their elevators lost power.

In Kyiv and other cities, Ukrainian air defense systems fired into the sky, and following a now-repetitive, grim routine, civilians headed for bomb shelters.

“To be honest I feel relief this time,” said Olha Kotrus, 34, interviewed after she took shelter in a subway station in Kyiv. “For two weeks there were reports that it might happen and then you live in constant tension.”

Ms. Kotrus joined a crowd of hundreds of people deep underground at the Golden Gate station, named after the main fortification that served as the medieval entrance to the city.

By evening, however, the famed gate was not illuminated, forced into darkness like much of the city. At least 10 missiles were aimed at Kyiv on Monday, according to local officials. Nine were shot down above the capital, the officials said.

Like everyone interviewed in Kyiv, Ms. Kotrus’s anger was directed at Russia and her frustration was the result of days filled with anxiety and long, dark nights without power.

“We all understand that without electricity, life becomes impossible,” said Liudmyla Vonifatova, 66. “Yet, we will just have to find a way to get through it.”