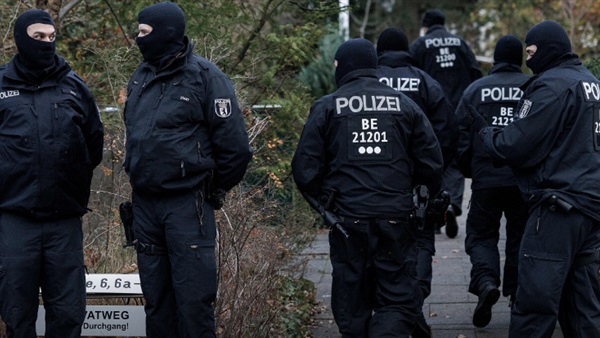 The plan was to storm the German Capitol, arrest lawmakers and execute the chancellor. A prince descended from German nobility would take over as the new head of state, and a former far-right member of Parliament would be put in charge of a national purge.

To facilitate the coup, the electricity network would be sabotaged. Satellite phones to communicate off grid had already been bought.

That is what German prosecutors and intelligence officials say a nationwide far-right terrorist network was plotting before 3,000 police officers and Special Forces fanned out across the country on Wednesday to raid 150 homes and arrest 25 suspected co-conspirators. They included an active duty soldier, a former officer in the elite special forces, a police officer and at least two army reservists.

Among the items uncovered was a list containing 18 names of politicians considered enemies, possibly to be deported and executed, among them Chancellor Olaf Scholz, people familiar with the raids told The New York Times, requesting anonymity because they were not authorized to discuss the investigation.

This was the latest of a series of plots discovered in recent years of extremist networks preparing for a day the democratic order collapses, a day they call Day X, the subject of a New York Times podcast series last year.

“This is not the first case of a cell like this planning for Day X,” said Konstantin von Notz, a lawmaker and member of the intelligence oversight committee in the German parliament. “The number of these cases are piling up and the question is to what extent are they connected.”

It is not clear how capable the plotters would have been at executing such an attack, nor how close they were to attempting to implement their plan: According to some intelligence officials, the group had twice missed dates when they had aimed to trigger their attack. But many of those arrested were known to be heavily armed, prosecutors said, describing the plot as possibly the most brazen in Germany’s postwar history — one aimed directly at the heart of the state.

“This represents an escalation. They had plans to march into Berlin and take out part of the federal government,” said Stephan Kramer, head of domestic intelligence of the state of Thuringia, where several of the raids took place. “In their plan to overthrow the government, they were willing to accept deaths.”

Beyond the immediate threat, the scale of the raids and the ambition of the plot prosecutors outlined pointed to persistent vulnerabilities to extremism in Germany’s core institutions — its Parliament, its judiciary, its local and state police, and even its most elite military forces — which the German authorities have struggled to root out in recent years.

One of the sites raided on Wednesday was a military barracks. Among those detained around the country were a member of the far-right Alternative for Germany, or AfD, party who had served in the German Parliament; a German prince; and a Russian citizen accused of supporting the group’s plans. Federal prosecutors said that they were investigating a total of 27 other suspects as well.

Two people arrested were detained outside Germany, one in Austria and another in Italy.

Prosecutors said the group was formed in the past year, influenced by the ideologies of the conspiracy group QAnon and a right-wing German conspiracy group called the Reichsbürger, or Citizens of the Reich, which believes that Germany’s post-World War II Republic is not a sovereign country but a corporation set up by the victorious Allies.

For years, the Reichsbürger had been seen as almost a sideshow among Germany’s far-right groups, made up of a loosely dispersed network of some 20,000 people with bizarre conspiracy theories.

“It has always been believed that only a small percentage of them are right-wing extremist,” said Hajo Funke, a political scientist at the Free University in Berlin, who focuses on right wing extremists. “That was always wrong, and we are seeing now the mistake in the downplaying this danger.”

In recent years, and especially since the pandemic, the group gained new energy as its followers and thinking combined with the conspiracy theories of the QAnon movement, in particular seeing a threat from the so called “deep state,” a shadowy cabal of corrupt elites they imagine running the government.

One conviction shared by its members was that “Germany is currently ruled by members of a so-called deep state” that needed to be overthrown, a statement from prosecutors said.

Prosecutors said that to carry out its plans the group had formed a military wing, which was actively trying to recruit in police and military, and a political wing, which it called the council, a sort of shadow government it intended to install in Berlin.

“The military arm would build a new German Army, consisting of ‘homeland security companies’ yet to be established,” the federal prosecutor, Peter Frank, said on Wednesday. Members of the military faction had also been active in the federal armed forces, he said.

The attackers, prosecutors said, seemed willing to use violence. “Members of the organization were aware that this goal can only be achieved through the use of military means and violence against state representatives,” the prosecutor’s statement added. “This also included commissioning killings.”

It was not the first plot against government officials that law enforcement agencies have foiled this year.

In April, officers arrested four people who had been plotting to kidnap the health minister, Karl Lauterbach, and cause nationwide power outages. The police said that the suspects were linked to the Reichsbürger and anti-vaccine movements.

In the plot exposed on Wednesday, an AfD member, identified in German media as Birgit Malsack-Winkemann, a lawmaker until last year,  was designated to become the group’s justice minister in the post-coup regime the prosecutors said.

Her own story highlights some of the challenges German institutions face in trying to fight far-right threats from within: Only in October, Ms. Malsack-Winkemann was allowed by a judicial board to retain her position as a judge in Berlin, despite the protest of several regional judicial authorities, who said she had far-right views.

The German newspaper, Der Spiegel reported that she had posted regularly on Telegram using the slogan “WWG1WGA,” which stands for the QAnon slogan, “Where we go one, we go all.” Spiegel said she deleted the posts after it questioned her.

But according to an internal judiciary review, her social media posts were not considered sufficient evidence to disqualify her.

“If these initial reports are confirmed, that a former AfD member of the Bundestag is involved in this conspiracy, then that shows what kind of quagmire the AfD as a party is in,” said Christian Dürr, a lawmaker for the Free Democrats, one of three governing parties. “This is not about Germany at all, it is in truth about the destruction of parliamentary democracy.”

The ringleader of the group was identified as Prince Heinrich XIII of Reuss, the 71-year-old descendant of a former German royal family. He was designated to take over as the new head of state.

Already, the Reuss family earlier this year distanced itself from Heinrich XIII because of his involvement in the Reichsbürger scene, calling him a “conspiracy theorist” and a “confused old man.”

According to the members of the group, liberation is promised by the imminent intervention of the “Alliance,” a technically superior secret coalition of governments, intelligence services and militaries of various states, including Russia and the United States, according to the prosecutors.

Prince Heinrich XIII had tried to make contact with representatives of the Russian government through the Russian Embassy in Berlin. A Russian citizen, whom the prosecutors identified as “Vitalia B.,” is believed to have helped him in trying to establish contact with Moscow. But prosecutors said there were no indications that they had received a positive response from the Russian sources they had contacted.

A Russian government spokesman on Wednesday called the plot “a German internal problem.”

“There can be no question of any Russian interference,” the spokesman, Dmitri S. Peskov, told reporters.

Germany’s intelligence services have for years said that the greatest threat to the country came from domestic, far-right extremist groups. Right-wing extremists in 2019 killed a local politician in the German state of Hessen, and in the same year attempted to attack a synagogue. A year later, a far-right terrorist killed nine immigrants and descendants of immigrants.

All these attacks have increased the sense of urgency among Germany’s law enforcement agencies to act decisively, analysts and officials said.